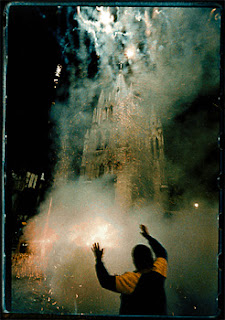 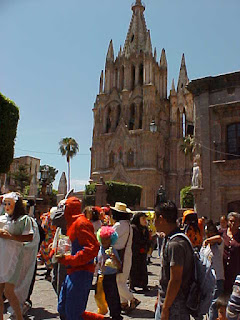 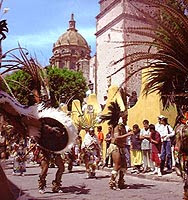 San Miguel de Allende, Guanajuato, in the heart of Mexico, just in the border between the volcanic zone and the desert of the Mexican central high plateau, offer to the visitor in this beginning century, the most valuable, its community: its open and tolerant people to the cultural expressions of the people who visit us in this precious Mexican place.
With more than 70 years to live a culture on coexistence with the national and international tourism and knowing that San Miguel de Allende is one of the tourist destinies with high quality and more sought in the planet by their people, location,climate, ancient architectonic unit , its cosmopolitan atmosphere with vocation to the arts and popular manifestations with centennial tradition, offer to the visitor its cultural values, its natural patrimony, with an inheritance of more than 2.500 years from the first settlers chupicuaro, passing through the prototoltecs, chichimecas and otomíes, real founders of San Miguel in the first times of Spanish domination in the decade of 1540, to viceregal times that were transformed with the insurgent conspiracy in the early XIX Century. Following the re - discover and valuation of the strangers and foreigners, who decided from 1939 make of San Miguel their city of residence. To experience San Miguel de Allende, beyond the cosmetic is a suggestive invitation to always be touched.
Publicadas por arturomoralestirado.blogspot a la/s 16:49