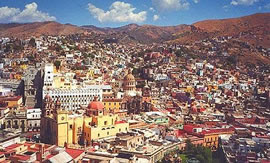 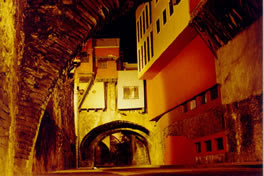 Guanajuato comes from a voice purépecha that it means mountainous place of frogs.

The Virrey Antonio de Mendoza founded the Stay: Real of Mines of Guanajuato in 1946.

Don Diego of Valencia begins the operation of the Mine of the Valencian in 1557, later its owner was Don Antonio de Obregón and Alcocer, who at the end of the S. XVIII the man richest of the planet was considered; it financed the construction of the Temple of San Cayetano (Valencian).

Guanajuato produced between one fourth or fifth part of the silver extracted of the New Spain during the Virreinato.

The shot of San jOse, one of those of the Valencian, was deepest in century XVIII with 527 ms of depth.

In the Alhóndiga de Granaditas (1808) happened the controversy first battle of the insurgent army against the Spaniards.

24 of November of 1810 is assassinated Spanish and Creole opposites to independence.

14 of October of 1811, bequeaths to Guanajuato the heads of Hidalgo, Allende, Aldama and Jiménez, Will remain hung by near 9 years in the corners of the Alhóndiga de Granaditas.  In 1858, by less of a month, Juárez declared Capital from the Republic to the City of Guanajuato.

In 1864, the Emperor Maximiliano and his empress Carlota spend one week in this City.

The time of luxury in Guanajuato was lived at the Porfirio Díaz time.

In 1947, officially is created the University of Guanajuato.

In 1998, UNESCO declared it: Patrimony of l humanity.

Guanajuato is host of the Festival the Cervantino International, that has been carried out in 33 years.
Publicadas por arturomoralestirado.blogspot a la/s 19:49